Published by Cambridge Stays on August 29, 2019

On the afternoon of Wednesday 28 August Cambridge Stays announced that a rally would be held that evening at 6 PM to condemn the undemocratic plan of Prime Minister Boris Johnson to prorogue Parliament in order to prevent MPs from voting to block a no-deal Brexit.

The rally was reported by the Cambridge News and Cambridge Independent, and on ITV News Anglia. following the rally Paul Browne was interviewed by BBC Radio Cambridgeshire (starts 1:09).

Paul Browne, Chair of Cambridge Stays, read out statements sent by Daniel Zeichner, MP for Cambridge, and Heidi Allen, MP for South Cambridgeshire, who were unable to join us due to prior

You can watch videos of several of the speeches at on local journalist Antony Carpen’s Youtube Channel.

Paul commented after the event:

“I was surprised and delighted by the very large number of people who joined us at such short notice this evening, which shows just how angry people in the Cambridge area are at the undemocratic actions of Boris Johnson, and how motivated they are to oppose him. The unity displayed across party political lines was especially encouraging, and is exactly what we need right now!

Today was a dark day for democracy in the UK, but those attending our rally and others like it across the UK have lit a thousand candles. Over the coming days and weeks we will continue to support our MPs as they hold the Government to account. We will not let the government shut down our parliamentary democracy.

There is no democratic mandate for a no-deal Brexit, and Boris Johnson knows that there is no majority for it in Parliament either. His action in seeking to close down Parliament is a desperate and dangerous one, and we believe that MPs and the people must unite to keep Parliament open and prevent the dangerous no-deal Brexit he is taking the UK towards.” 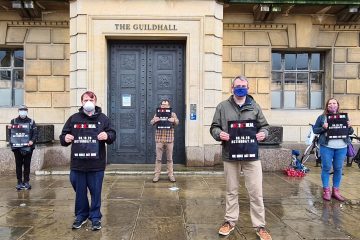